Are you ready to take fashion advice for the best car designs on Rocket League? The number of possible combinations is still enormous, and you can make even the basic designs seem fantastic by combining different elements. At rocketleaguedesigns.com, we are going to share the top 10 best tryhard Rocket League car designs that you […]

Scarab is a Rocket League vehicle released in 2015, which was available through the DLC pack. Scarab does have a good amount of potential, you can practice with it in the game. Now we have some new Rocket League car designs using Scarab as the car body, Vaticinator decal and Gadabout:Inverted wheels, more budget Rocket […]

Rocket League is bringing a new feature originally from a popular mod called Bakkesmod. This is a positive sign because it could indicate that more features from Bakkesmod will be implemented into the game in the future, which is exciting. In this guide, we are covering 6 new features that could be coming to Rocket […] Welcome back to our column of Best Rocket League Car Designs, today we will go over top 10 amazing painted Dominus car designs with Trigon decals and Tanker: Infinite wheels, you will surely be impressed by them. Again, we will talk about some details about the car and present the ways to get the designs […]

Have you ever sat in the Rocket League garage and thought what color car design to use? There are so many options, there are 13 different paint colors on Rocket League, it’s so hard to choose what color to make your car. What if we could just choose all the colors and make rainbow cars […]

Outlaw GXT is a new car in Rocket League and is introduced along with Season 4. Based on the western theme of the race car soccer game, players can unlock the Outlaw GXT on level 70 of the Battle Pass. It should take a long time to reach Rocket Pass level 70, if you want […] 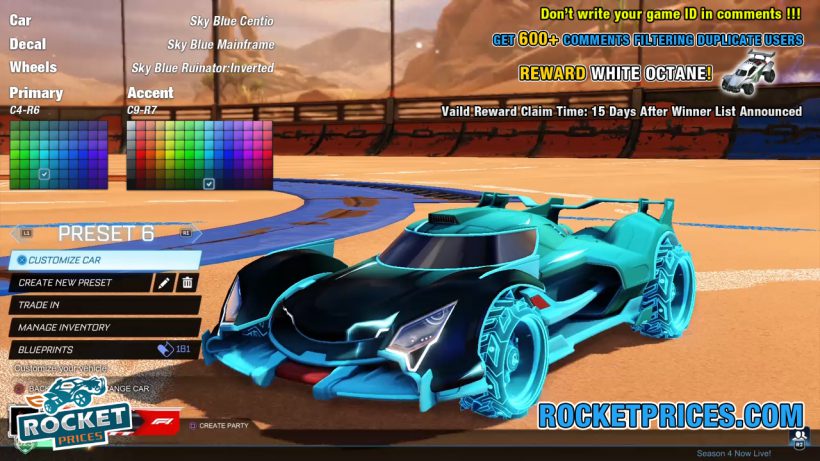 It’s time for our column of Rocket League Car Designs, here we are going to present the Best Centio Designs for you, also cover some information about the battle-car and the ways you can get it. Not wordy, let’s get into today’s topic now!   Top 10 Centio Designs with Mainframe Decals & Ruinator:Inverted Wheels […]